The Most Expensive Car In the World Is...

What is the most expensive car? Here’s a hint: it starts with Bu and ends in Gatti.

There are expensive cars in this world, but then there are really expensive cars. How expensive are we talking? Start with $1,000 and add three more zeroes.

Car selling sites can be a drag. RumbleOn is different.

If you’re wondering how to sell a car online, RumbleOn makes it quick and easy. Cash offers are sent in 15 minutes or less and you don’t even need to leave the couch.

I’ve come to the conclusion that I will never be able to afford any of these cars. And hey, I’m okay with that. Can you imagine how much it costs to insure a vehicle over $100,000? In the pantheon of expensive cars, you have your usual suspects: Porsche, Ferrari, Rolls Royce, so on and so forth. But, there’s one car manufacturer that sets itself apart from the others. That, my friends, is Bugatti. They’re famously known for producing some of the world’s most expensive vehicles, and it shows. Their designs are other-worldly and when it comes to performance wrapped up in a luxurious package, it doesn’t get any better than a Bugatti.

Drum roll please: the most expensive car in the world is…

The Bugatti La Voiture Noire. Man, what a car. This thing looks like something James Bond would drive. Sleek design, incredibly powerful, luxury out the wazoo: this is truly a one-of-a-kind car. It’s in a class all its own. It’s closely related to its brother, the Bugatti Chiron. Comparing these cars might have you seeing double as they are similar in design and performance. The only glaring difference is the price tag.

Are you ready for some mind-blowing specs? The engine has 16 cylinders, four turbochargers, 1,500 horsepower, and 1,180 ft. lbs of torque. If you tap the pedal you might melt the tires immediately. Surprisingly, with all that power under the hood, you’d think the top speed will exceed 300 mph, but it doesn’t: it tops out at 260 mph. It can scoot from 0-60 in 2.4 seconds. 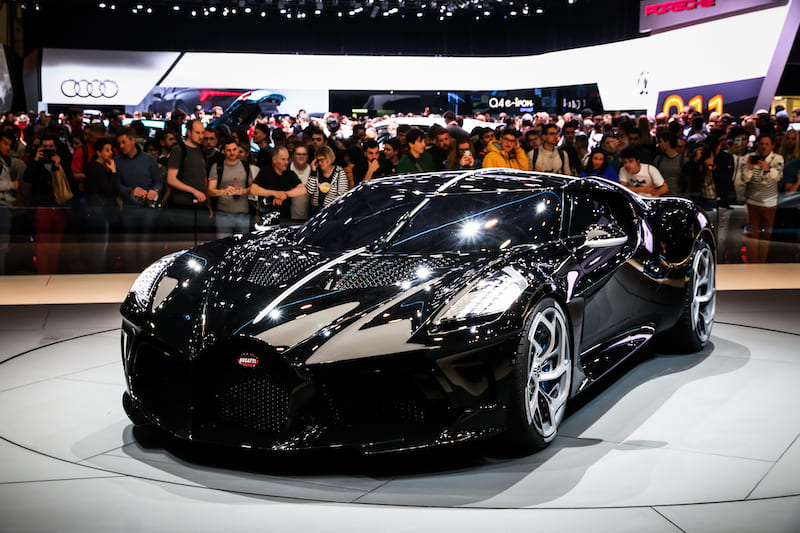 From a visual perspective, the snout of the car is pointy with small vents on the trunk lid. As you move across the car, the lines are smooth and straight with slight curves near the rear of the vehicle. The rear end is my favorite part: six tailpipes. I think it’s safe to say whoever buys one of these cars is a complete badass. 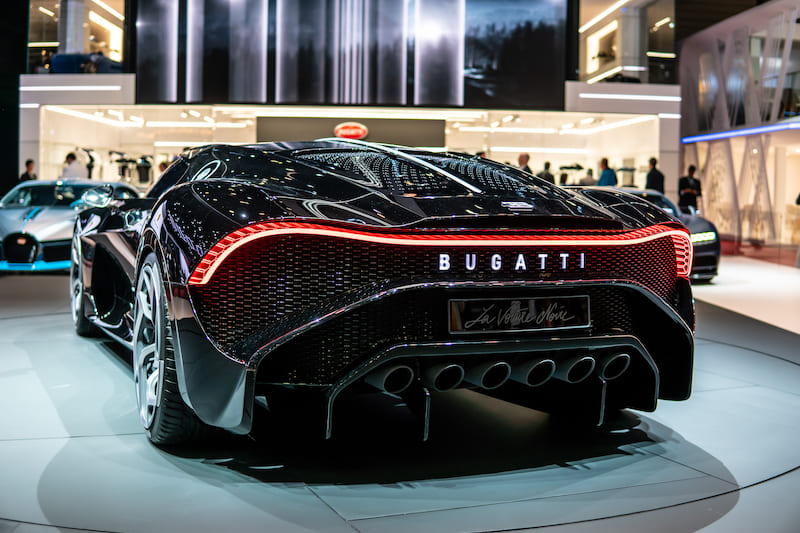 The Bugatti La Voiture Noire exists for a reason: it’s a tribute to the 1936 Type 57 SC Atlantic which, at the time, was arguably one of the most beautiful cars of all time. Bugatti designers knew from the beginning that the La Voiture Noire would be a reinterpretation of the Type 57 SC Atlantic while also celebrating the company’s 110th anniversary. Quick history lesson: the Type 57 SC Atlantic was only made four times from 1936 until 1938. If you have one, consider yourself super-wealthy, and lucky. It’s an absolutely stunning car that showed the lengths at which Bugatti was willing to go to create a vehicle that defied conventional design elements.

The Bugatti La Voiture Noire is an example of engineering ingenuity and amazing design. It seriously looks like a piece of art that belongs in a museum. So, about that price tag: you’re going to need to empty your bank account and then some to afford this car. Grab your friends and family, pool your money together, start a GoFundMe campaign, and maybe, just maybe, you’ll get to that number.

And that number is…$18.9 million. You might as well call it $19 million just to be safe. Just to put that in perspective, you could buy a mansion in Malibu, California with a few million left to spare for that amount. That’s a lot of dough for a car, but apparently, it’s worth every penny. If I happen to befriend The Queen or Bill Gates, this car will be mine.

Where to sell a car, you ask? Give RumbleOn a try!

When it comes to selling a car, it can be a tough process. Luckily, RumbleOn makes the process simple and stress-free. Not only is selling a car easy with RumbleOn, but the trade-in process is  easy, too! When you need to trade in a car, you can trade in for any vehicle in our inventory. So, if you ever ask yourself, “Where should I trade in my car or sell my car?” The answer should always be RumbleOn. Give us a try today!