To say Henry Ford was a revolutionary figure in the automotive industry would be a massive understatement. Industrialist, business magnate, sponsor of the development of the assembly line technique: many businesses across the world owe a tip of the cap to him. It was the Model T, however, that made the Ford name synonymous with innovation.

Interested in a car trade in? RumbleOn can assist you.

RumbleOn gives you the power to trade a car, truck, or SUV for any vehicle in our inventory. Use your cash offer value towards anything. Learn more today!

His Model T changed the automotive world forever. It was named the most influential car of the 20th century in the Car of the Century competition, ahead of the BMC Mini, Citroën DS, and Volkswagen Type 1. How popular was it? It sits eighth on the top ten list of most sold cars of all time with a whopping 16.5 million units. Eat your heart out, Tesla: this was the original game-changer.

The Model T is a big part of the History of Ford.

Quick history lesson: the Ford Motor Company was founded by Henry Ford and incorporated on June 16, 1903. Ford plays a major part in the history of the automobile industry being a member of “The Big Three” along with General Motors and Chrysler. These three automotive giants formed the backbone of the American car industry and not much has changed since.

The Model T, a vehicle that changed the American automotive landscape forever, rolled off the production line on September 27th, 1908, at the Ford Piquette Avenue Plant in Detroit, Michigan. It was also known as the Tin Lizzie, Leaping Lena, jitney or flivver. It certainly wasn’t the first vehicle ever produced, but its impact was significant, especially among the rising middle class.

Why was it so significant? Because it provided inexpensive transportation on an incredible scale while also becoming a symbol of America’s modernization age. The 15 millionth Model T Ford left the assembly line on May 26th, 1927. 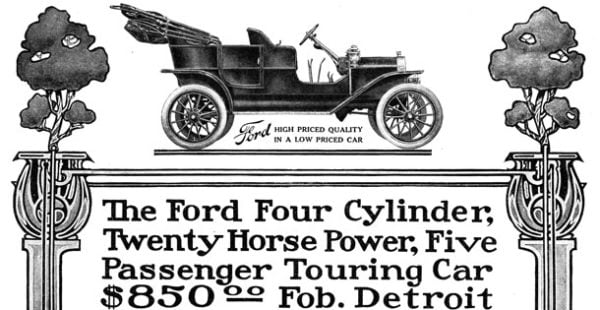 Cars around the turn-of-the-century were expensive, scarce and were, more often than not, unreliable. The Model T changed all of that in 1908. Described as reliable, easily maintained, and marketed as great for mass transportation, it was hugely successful. It was so prosperous that 15,000 orders were placed days after its release. For the next 19 years, Ford pushed out as many Model T’s as it possibly could, with the 15 millionth rolling off the assembly line on May 26th, 1927.

Trivia time: curious why it’s called the Model T? Truth be told, Henry Ford devised a series of vehicles between the founding of the company in 1903 and the first Model T. The first car Ford produced was named the Model A and he proceeded to move through the alphabet eventually ending on the Model T. Twenty models in all were included though not all of them went into production. The Model S preceded the Model T, which was an upgraded version of the company’s biggest success before the Model T, the Model N. Interestingly, the follow-up to the Model T was the Ford Model A rather than moving onto a “Model U”.

The Model T was Ford’s first automobile that was mass-produced on moving assembly lines complete with interchangeable parts that marketed perfectly to the middle class. Henry Ford put it best, “I will build a motor car for the great multitude. It will be large enough for the family, but small enough for the individual to run and care for. It will be constructed of the best materials, by the best men to be hired, after the simplest designs that modern engineering can devise.” Though Henry Ford didn’t develop the assembly line on his own, his Model T is credited with advancing the efficiency of the system. 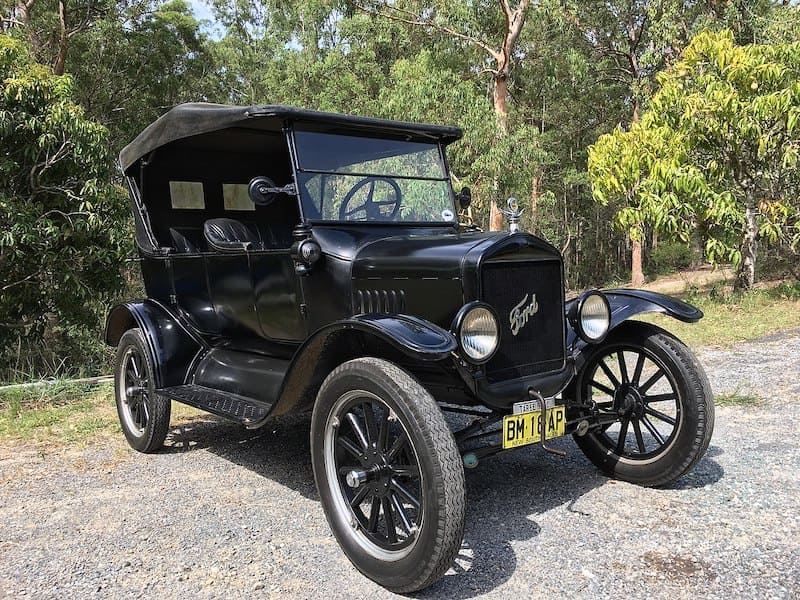 By 1918, half of all cars driven in the U.S. were Model Ts. Not all Model Ts maintained the same design as its predecessors. There were several changes made to its body and drivetrain from 1908 to 1927.

1915-1916: The hood design practically remained untouched with the only difference being the addition of louvers to the vertical sides.

1917-1923: The hood design changed with a tapered appearance and curved top. The “low hood” look was introduced that included folding hinges located at the joint between the flat sides and the curved top.

1923-1925: The taper of the hood was increased while the rear section at the firewall is an inch taller and several inches wider.

1926-1927: This period included the most obvious design change. The hood was enlarged and the distance between the firewall and windshield was also increased. This style is commonly referred to as the “high hood”. This style was a preview for the soon-to-be Model A.

Ford history is entrenched in the Model T and its successful years. True, there are more iconic models that are well-known to the masses, such as the Mustang and F-Series trucks, but it was the Model T that put Ford on the map as automotive giants. If you ever have the chance to buy a Model T, do yourself a favor and consider it. They may be ancient cars, but I’m willing to bet they’re fun to drive and you’ll be sure to turn many heads in the process.