Southern California was a dream destination in the early to late 1960s. Fast-forward fifty years and the fun-in-the-sun lifestyle is still as omnipresent as the Pacific waves. While Los Angeles often gets most of the SoCal praise and attention, San Diego is the unsung little brother that, in my opinion, is more beautiful than L.A.

Regarded as one of the cleanest cities in the country, San Diego is simply breathtaking. Beyond its world-famous attractions, you’ll find miles of pristine beaches and stunning sunset views. Welcome to San Diego, friends! 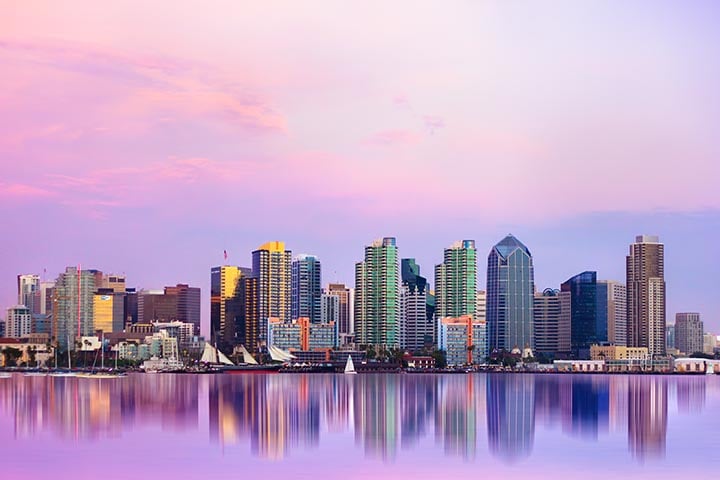 Are you California dreamin’? Before you hit the road, shop used cars.

If it’s an SUV you seek, check out RumbleOn’s inventory of high-quality used SUVs, cars, and trucks. Each one comes with a 3-Day or 150-Mile Money Back Guarantee, 30-Day Mechanical Guarantee, third party full condition report, and affordable door-to-door shipping.

Background and History of San Diego

San Diego has often been called “the birthplace of California” and it’s easy to see why. Miles upon miles of beaches and gorgeous views welcome all visitors to this paradise under the sun. San Diego is the eighth-largest city in the country with an estimated population of 1,425,976 people (July 2018). The population is expected to grow at an annual rate of 1.7%.

The original inhabitants of the region are now known as the San Dieguito and La Jolla people. While not the first person to discover San Diego, Alonzo Erastus Horton is known as the Father of New San Diego. The original town of San Diego was located in Presidio Hill which is the current location of Old Town San Diego State Historic Park. Because it was away from navigable water at its port, it was moved to “New San Diego”, miles south of the original location.  From then on, new businesses began to flood into the area and the rest, as they say, is history.

Embarcadero
3165 Pacific Highway | San Diego
San Diego’s beautiful harbor-front that’s lined with unique shops, eateries, and some of the most jawdropping sights of the city.

San Diego is calling. Make it your next road-trip stop.

Before you hit the road this summer on a road trip, it’s best to travel in something better. You can buy used cars online. Each one comes with a 30-Day Mechanical Guarantee, 3-Day or 150-Mile Money Back Guarantee, third party full condition report, and affordable shipping to your door. You can also browse used trucks for sale if you’re into a more adventurous ride. So, go on, do it: browse our cars for sale online today.