The 2016 Toyota 4Runner continues its long legacy of giving the driver an exceptional driving experience. New for 2016 was an updated multimedia interface and brand new Quicksand exterior color for the TRD Pro trim. 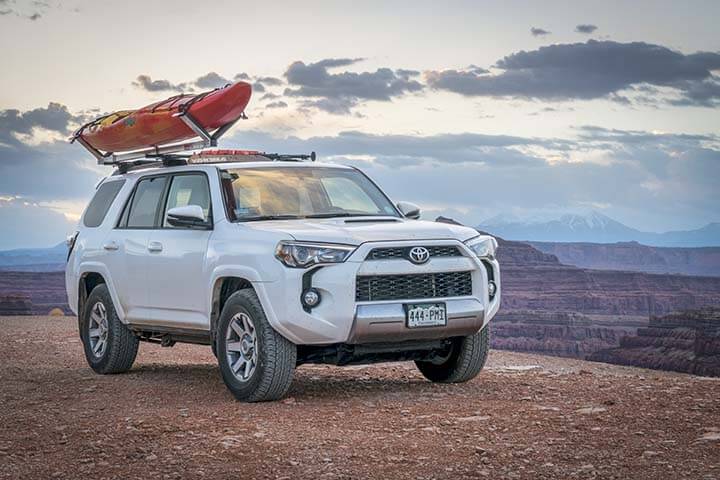 There’s no better place to buy used SUVs than RumbleOn.

Wondering how to sell a car online? Not only can you sell to RumbleOn, but you can trade in a car for anything in the inventory, too!

This three-row SUV remains one of the most popular vehicles in the United States. Whether you’re more of a rear-wheel drive or four-wheel drive type of person, the 2016 model is built to cover any kind of ground with whichever transmission you choose. Since 1984, the Toyota 4Runner has been a staple in the SUV community and it has never looked back. This fifth-generation 4Runner is available in three trim levels with each offering their own unique features. And when it comes to resale value, the 2016 Toyota 4Runner is near the top.

The 2016 Toyota 4Runner is powered by a 4.0-liter V-6 that is rated at 270 horsepower and 278 lb-ft of torque that is combined with a five-speed automatic transmission. Unlike its competition (namely the Highlander and RAV4) the 4Runner remains a truck-based body-on-frame SUV. What does that mean? It’s sturdier and can handle off-roading punishment. If towing is a need, the 4Runner excels in that department. When the vehicle is properly equipped, it can tow up to 5,000 pounds. The vehicle has lots of cargo capacity at 9.0 cubic feet behind the third row, 46.3 cubic feet behind the second row, and 88.8 behind the front seats.

The Toyota 4Runner earned a four-star overall safety rating from NHTSA. Additionally, it received a score of “Good” from the IIHS on all but the small front overlap test where it received a Marginal rating. Active safety and driver assistance features are not available in the 2016 4Runner.

The traditional way of buying vehicles has changed for the better. What used to last hours or days can now be done in minutes! You can buy a used SUV online with RumbleOn. Each vehicle comes with a third-party full condition report, 3-Day or 150-mile Money-Back Guarantee, 30-Day Mechanical Guarantee, and affordable door-to-door shipping. We’ve got used SUVs for sale, so start and end your search with us. Find your next SUV today!