The Challenger made its mark in history way back in 1969 for the 1970 model year, and instantly became a famed favorite of the newly-established muscle car family. 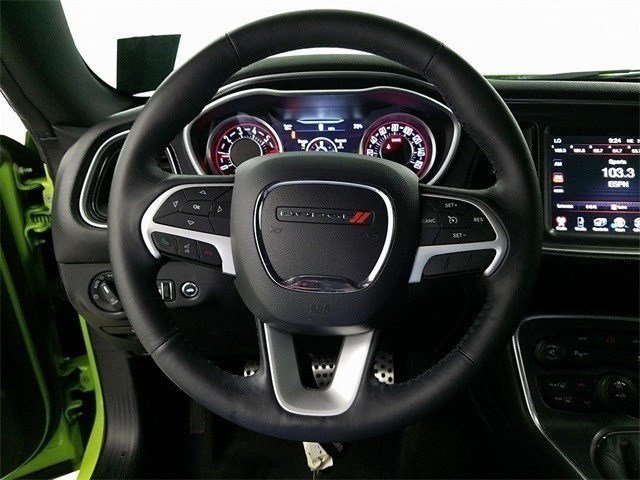 RumbleOn makes it easy to trade a car!

Today, the image of the Challenger lives on, and Dodge Challenger reviews for the 2015 model show much love for a comfortable ride in a luxuriously appointed interior, and quite a bit of kick in the SRT variants. Below are the 2015 Dodge Challenger specs and reviews reported from research and drivers of the SXT Coupe model.

The 2015 Challenger comes with 10 different model options that range from the SXT Coupe, 392 HEMI Scat Pack Shaker, Plus, and Hellcat Coupe trims. As far as Dodge Challenger reviews from drivers, downsides of the 2015 Challenger models include a heavy curb weight and handling that doesn’t match up with other cars of its class.

The 2015 Challenger provides good ride quality with a comfortable amount of space in the interior. Trunk space in the Challenger provides 16.2 cubic feet of cargo volume, and the updated cabin is outfitted with roomy rear seats, high-grade materials, and soft-touch plastics. Tech amenities found in the 2015 Challenger include an infotainment system with optional UConnect interface, as well as an 8.1-inch touchscreen.

The 2015 Dodge Challenger gas mileage is capable of earning 19 City/ 30 Highway with the SXT Coupe according to the EPA, while other models such as the beefy 392 HEMI Scat Pack Shaker Coupe earn a meager 14/23.

The Dodge Challenger safety features earned five-star rankings for the NHTSA side crash overall ratings, but only earned four stars on the front driver and rollover ratings. The IIHS test earned the 2015 Dodge Challenger safety features a “good” rating on the moderate overlap and side impact test results, and an “acceptable” rating on rear crash protection and roof strength tests, and a “marginal” in the small overlap test results.

If you're looking for a quality Dodge for sale, look no further than RumbleOn. We have Challengers for sale, Rams, and more. Plus, each vehicle comes with a 30-Day Mechanical Guarantee, 3-Day or 150-Mile Money-Back Guarantee, third-party full condition report, and affordable shipping. Pick your Dodge today!